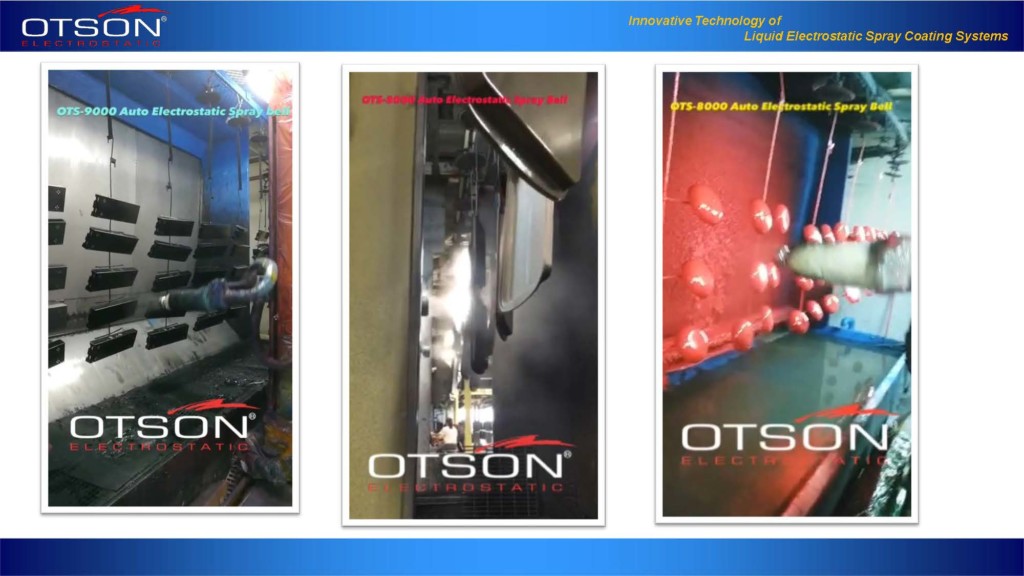 We Are Usually Asked About

Q2. What is the advantage and disadvantage of electrostatic/conventional airless and air spray ?

The finish required between an airless gun and an Electrostatic Air Spray gun is significant.
Even ambient conditions can make a large difference. In general, the electrostatics works best on small particles such as are common with an Air Spray product. Conventional airless produces larger particles and high directional velocity and usually have a much high fluid delivery than does Electrostatic Air Spray. In basics, the Electrostatics Air Spray offers more gain in efficiency and a much higher finish quality than airless. If the product is currently sprayed airless and higher efficiency is needed, the best route is to go to an Electrostatic Air Assisted Airless technology. The operator can use the same pump/system as his old Airless and all that is needed is a small air compressor for the gun.

Q3. Does electrostatics work only when spraying metal pieces ?

Q4. Why should I choose an electrostatic spray gun over a conventional spray gun ?

Although an electrostatic goo may cost more, it has many advantages over a conventional spray
gun. An electrostatic goo has a very high transfer efficiency (40-98%) which results in a lower paint cost, less VOC, less cleanup and faster production.

Q5. How does a rotary atomizer work and where should I consider using one ?

If you’re looking for high fluid delivery (up to 1500 cc/min), an even finish, and automation, you
may want to consider a rotary atomizer. A rotary atomizer works by spinning a bell or disk at high speed (up to 80,000 RPM). This high speed, along with the serrated edge of the bell or disk, provides an excellent means for atomization.

Q6. Do I need to purchase equipment specifically for a waterborne paint ?

In the other brands, yes you have buy the different model.Waterborne paints are highly conductive. As a result, the paint Supply and fluid lines must be
isolated Power supplies must also be designed to accommodate tor the inherit high current draw of waterborne paints, Spraying waterborne paint through a solvent-borne system is dangerous and may result in equipment damage.For OTSON ALL Liquid electrostatic spray equipment are able to use water based and solvent without any problem.

Q7. Can electrostatics be used to paint something other than metal? if so, will you get the same benefits as spraying metal electrostatically ?

Almost any product can be finished electrostatically. Some may require pretreatment with chemical sensitizers to produce a conductive surface. With some products, a metal object may be placed behind the part to create a ground image for attraction. Many black rubber items have enough carbon content to be sprayable. Others, such as wood parts, sometimes have enough moisture to produce a ground sufficient to spray electrostatically. The many advantages and savings associated with electrostatic spraying justify the application of a pretreatment or preparation product. Materials, maintenance, labor and filter savings alone help justify an electrostatic application, not to mention increased production.

Painting electrostatically will give better transfer efficiency (more paint on the part) but not better adhesion. Adhesion depends on the condition of the substrate and the properties of the paint. Painting, in general, electrostatic or conventional, requires the same type of properly prepped surface before applying paint. Proper preparation is an important key to a good paint job.

Yes. Waterborne paints are the most conductive paints made. This makes them ideal for electrostatic applications. However, when spraying waterborne paint electrostatically, the charge will be carried back to the fluid-supply system, Therefore, spraying waterborne paint electrostatically requires isolating the paint-supply system from contact with people. Special hardware is required, such as an isolation stand and cage or voltage-blocking system. Various types of isolation devices are available, depending on the application and manufacturer.

Q10 .What needs to be grounded when using electrostatic guns ?

All of the equipment, personnel and target parts in the spray booth area must be grounded Any ungrounded object, or person, in the spray area can become electrically charged. Improper grounding can result in static sparking which can cause fire or electric shock.

Q11. What is the best way to check the voltage of an electrostatic gun ?

There are several ways to check the voltage of an electrostatic gun. The best way to check the
voltage is to have a OTSON  Electrostatic test equipment kit. Included in this kit are the high voltage probe and meter, the PRO Cartridge and Alternator test fixture, and the alignment sleeve for use with all of the OTSON Guns and power supplies. With this kit, you are assured of accurate voltage measurements of both the electrostatic gun and power supply.

Q12. What is the difference between a cascade and a classic type power supply ?

A cascade type power supply sends out a low voltage that is then stepped up at the transformer on the gun. A classic type immediately sends out the required high voltage.

Nearly all solvent-borne and waterborne coatings can be applied by OTS-3000+. A coating’s impedance should be between 20M ohm to 30 M ohm obtain an appropriate charge. Changes can be made to make a coating more conductive, including solvent additions, changes in solvent composition, and use of polar solvents. Viscosity corrections may also need to be made to ensure coating droplets are fine enough. The conductivity of the paint, or its capacity to carry an electrical charge, is an important factor in electrostatic spraying. The paint to be used should be conductive enough to accept the negative charge from the spray gun but not so conductive that the charged paint tracks back to ground through the paint system supply. Water-borne and metallic coatings tend to be highly conductive, while solvent borne coatings tend to be non-conductive. Paints can be modified with polar solvent ( E.g., alcohols and ketones) or conductive pigments (e.g., metallic pigments) to increase their conductivity. Likewise, highly conductive coatings can be modified to prevent the electrical charges from shorting to ground and leaving the paint uncharged. Paint throughput and coating quality are influenced by viscosity, surface tension, conductivity, solvent evaporation, etc., by the type of atomizing equipment, and by the way the equipment is controlled. An electrostatic spray system should balance paint particle velocity and electrostatic voltage to optimize coating transfer efficiency.

Viscosity:The property of a fluid whereby it tends to resist relative motion within itself. A thick liquid such as syrup has a high viscosity. Viscosity is often measured using an efflux-type cup, which gives the time required for a given quantity of paint to flow through a hole in the bottom of the metal cup at a given temperature (See Zahn Cup).

Some type of coatings and paints for reference.

Yes , also our OTS-3000+ equipment can do the final layer finishing .

Q15.Do I need to pre-paint the metals with anti-corrosion or ?

a. Removal of tape, tags, plates and other debris.
b. Surface sanding to assure good adhesion of the new paint .
c. Surfaces are wiped down with solvents and / or degreasers.
d. Masking of parts not to be painted.
e. Priming (anticorrosion) when and as required
f. Replace removed parts, unmask and cleanup.

Q18. Do you have different products or regulations for paints with high or low resistivity/conductivity ?

Our OTS-3000+ electrostatic power supply and gun are full range ability,If the high and low resistivity/conductivity paints are used with our gun , you have to adjust the electrostatic power meter until you can smooth spray paint. so it is not problem with our equipment .however the best resistance value of paint is between 20 and 30MΩ.

Our OTS-3000+ electrostatic power supply and gun are full range ability, So our equipment can use water-based paints. you can refer our user manual for more detail .
Waterborne= water-baesed ,

It is same equipment , this function is one of our best advantage .if you have our
OTS-3000+ ,you can use solvent and waterbase paints with no limited. In addition , you just need to pay one equipment fee only.

Q20 .Which is the method that you suggest to ground the equipment? And the sprayer (operator) ? How is it done ?

Q21. How to coating and paint wooden products ?

In fact, when they use electrostatic spray painting, the moisture of wood must be maintained
around 12 % ~15 % , also it can not lower than 8%. The moisture of wood and our equipment
are a major key. This is one of our best advantages.We have many customers are using our
OTS-3000 coating their wooden furniture in worldwide.

Q22. How to coating and paint plastic products ?

Q23. Do we need some special requested paints tank to connect to diaphragm pump, what you suggest for paint tank for setting up complete system ?

You don’t need to have special paints tank, use normal paint tank will be ok, however, if the
paints tank is made by metal, please remember to grounding / earth.

Did not Find the Answer?